Queen Elizabeth II’s cousin, Prince Edward, Duke of Kent is currently in Uganda where he will celebrate two jubilees on October 9. The Duke’s visit to Uganda is part of the celebration of the Queen’s Diamond Jubilee, which has seen members of the royal family travel to all commonwealth nations to mark the monarch’s sixty year reign. For Uganda, 2012 marks the 50th anniversary of full independence from the United Kingdom, the nation’s Golden Jubilee. The Duke of Kent represented the Queen at the independence ceremonies in Uganda’s capital, Kampala, in 1962 and his presence represents the continuity of his interest in this African nation. October 9 is also the Duke’s birthday. The Duke’s busy schedule of royal engagements and tours also demonstrates the importance of the Queen’s extended family to her relationship with the global commonwealth.

Following the death of Queen Victoria and the ascension of Edward VII in 1901, the number of members of the royal family performing official duties began to contract. Queen Alexandra assumed charitable patronages previously held by Edward’s sisters, Princesses Helena, Louise and Beatrice. In an era when overseas royal visits were rare, a smaller royal family appeared to suit public needs.

The process of streamlining the royal family was formalized in 1917 when King George V decreed that only children or male line grandchildren would be Princes or Princesses addressed as His or Her Royal Highness. The German royal titles of many members of the King’s extended family were abolished and replaced with titles that placed them within the English aristocracy. For the younger children and grandchildren of Queen Victoria resident in the United Kingdom, the reigns of George V and George VI marked their gradual withdrawal from royal engagements and life in the public eye.

By the time Queen Elizabeth II ascended to the throne in 1952, the public role of the royal family had expanded to encompass frequent personal visits to the Commonwealth, which expanded rapidly in the 1950s and 1960s as the decolonization of the former British Empire accelerated. The new Queen took her role as Head of the Commonwealth seriously and was determined to increase the royal family’s personal relationship with this global group of nations. To achieve this goal, the Queen reversed the streamlining of the royal family enacted by her predecessors and actively involved her royal first cousins, Prince Edward, Duke of Kent, Princess Alexandra, Prince Michael of Kent and Richard, the present Duke of Gloucester in public engagements and tours. 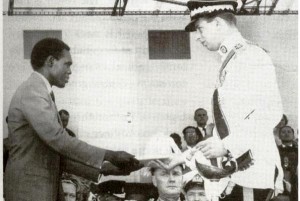 Prince Edward, Duke of Kent, hands the instruments of Ugandan independence to Milton Obote in 1962

Queen Elizabeth’s ascension therefore marked the beginning of Edward’s long career of public service. The sixteen year old Duke, who had inherited the title on the death of his father Prince George, (younger brother of Edward VIII and George VI), in an airplane crash in 1942, walked behind George VI’s coffin and swore allegiance to Elizabeth II at her coronation. Following his graduation from Eton, Edward enrolled at Sandhurst, the beginning of a long military career that included a tour in Hong Kong and command of a squadron serving in Cyprus as part of a United Nations force in 1970. Following his retirement from the military in 1976, Edward assumed the role of Vice Chairman of British Trade International, a position he held until 2001.

Although Edward’s 1961 wedding to Katharine Worsley, at York Minster cathedral, which had not been the setting of a royal wedding since the Middle Ages, had raised his public profile in the United Kingdom, Edward was not well known internationally until he represented the Queen at a series of independence ceremonies for new commonwealth nations including Sierra Leone, Uganda, Guyana and The Gambia. As royal historian Hugo Vickers has recently written, Uganda’s first executive Prime Minister Milton Obote did not consider the Duke of Kent to be a sufficiently senior member of the royal family to represent the Queen when Uganda formalized its independence, describing Edward as “a young man and totally unknown in Uganda.”

Despite the skepticism that greeted his arrival in Uganda for the independence celebrations, the Duke received popular acclaim for his speech, which expressed his admiration for the Ugandan people and hopes for the newly independent nation. Edward stated, “This lovely country which is your home was once aptly described as “a fairy tale” – a description given to it by one of the greatest men of our time, Sir Winston Churchill, who came to Uganda nearly sixty years ago.  In Uganda, he continued, “There is discipline, there is industry, there is peace”.  And, “From end to end, it is one beautiful garden.”

It was a well-deserved tribute, as my wife and I have been able to see for ourselves; it is now in your hands to preserve this good repute; to ensure that your country’s name is respected by other nations, not only in the vast Continent of Africa but throughout the world, and to build it into a nation that is envied everywhere for its stability, and for its happiness.” The full text of the Duke of Kent’s 1962 speech is available here.

Sadly, the people of Uganda experienced little stability or happiness during the first fifty years following independence. Obote was deposed in 1971 and replaced by the military dictator Idi Amin, whose eight year reign of terror resulted in the mass killings of 300,000 Ugandans. More recently, the civil war between the Ugandan government and Joseph Kony’s Lord’s Resistence Army, which is notorious for the use of child soldiers, has killed thousands and displaced millions. On the occasion of the fiftieth anniversary of independence, many Ugandans have expressed disappointment in the current state of the country.

The combined celebration of the Queen’s Diamond Jubilee and Uganda’s Golden Jubilee provides an opportunity for Uganda to begin a new chapter in its history. The stability and happiness predicted by the Duke of Kent in 1962 may finally occur in the twenty-first century as Uganda gradually rebuilds after decades of warfare. The Duke of Kent’s presence for the fiftieth anniversary of Ugandan independence represents the continuity of the monarchy’s relationship with this troubled commonwealth nation and the royal family’s hopes that the next fifty years will bring more stability and happiness to Uganda.