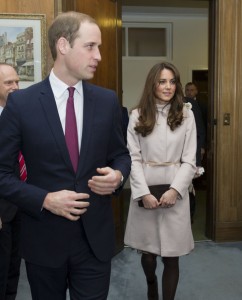 The Duke and Duchess of Cambridge Visiting the Cambridge Guildhall

The Duke and Duchess of Cambridge visited their namesake city today, arriving by train from London at 10am. The royal couple received an official greeting from the Lord Lieutenant of Cambridgeshire, Hugh Duberly and his wife Sally then met with the enthusiastic crowds. The Duke’s cheerful acceptance of a homemade baby gift from Cambridge resident and new mother Samantha Hill fuelled ongoing speculation that the royal couple will be starting a family of their own in the near future. Hill’s gift was babyclothes decorated with a picture of a helicopter and the words “Daddy’s little co-pilot,” alluding to the Duke’s work as a Search and Rescue pilot.

After lunch in a town pub, the royal couple toured Jimmy’s homeless shelter and the Peterborough City Hospital then attended receptions at the Guildhall and Senate House at Cambridge University. Among the 400 students and faculty members at the Senate House reception was the Duchess of Cambridge’s first cousin once removed, Dr. Penny Barton, graduate tutor at Homerton College. Barton attended the Duke and Duchess of Cambridge’s wedding in April, 2011 and was warmly greeted by the royal couple at the university. After this eventful day, the royal couple returned to London on the train. 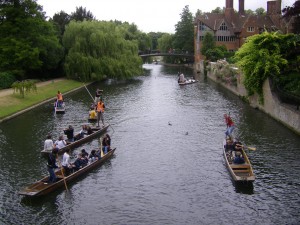 Punting on the River Cam, Cambridge

The Duke and Duchess’s visit to the city that gave its name to their Dukedom was well received. Cambridge has lent its name to a royal Dukedom since the Restoration of King Charles II in 1660. In contrast to his immediate predecessors, Charles had two younger brothers at the time of his ascension and therefore required additional titles for his prospective nephews.

The first Prince styled Duke of Cambridge was born into a royal scandal. During the interregnum of the 1650s when the royal family was in exile on the continent, Charles II’s younger brother, James, Duke of York, began an affair with Anne Hyde, a lady-in-waiting to his sister, Princess of Orange and the daughter of Charles’s advisor, Edward Hyde. In 1659, James and Anne were formally betrothed in secret, a ceremony often considered a binding as a wedding in seventeenth century England. The following year, Anne became pregnant and James’s fortunes improved dramatically with the restoration of his elder brother to the English throne. Since James was now in a position to marry a princess, he treated Anne as a royal mistress.

Anne Hyde, the strong willed Duchess of York and mother of the first Dukes of Cambridge

Anne refused to cede what she believed to be her rightful place as Duchess of York. She arrived in London at the time of the Restoration in the household of Princess Mary of Orange heavily pregnant and publicly affirming that she was betrothed to the heir to throne. Anne’s horrified father distanced himself from his daughter, declaring that the King should imprison her in the Tower of London for her presumption. James’s mother, the Dowager Queen Henrietta Maria openly questioned the paternity of Anne’s unborn child and five of James’s friends each expressed willingness to acknowledge the child as his own to allow the Duke of York to escape his betrothal to a commoner.

Eager to end the scandal, King Charles II made clear to James that  “He must drink as he had brewed and live with her whom he had made his wife.” James and Anne were quietly married and when their son, Charles was born on October 22, 1660, he was styled Duke of Cambridge. Anne would be the last woman from a “middle class” background to marry a direct heir to the throne until Catherine Middleton married Prince William in 2011. Sadly, the first Duke of Cambridge, and his younger brothers James and Edgar, who received the same title, all died in infancy. The two surviving daughters of the Duke and Duchess of York reigned as Queen Mary II and Queen Anne. 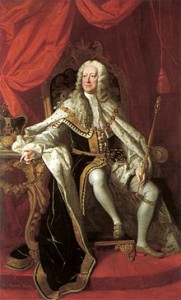 The title of Duke of Cambridge was revived in 1706 for the future King George II. He became a direct successor to the English throne following the 1701 Act of Settlement, which confined the succession after the death of Queen Anne to the Protestant descendants of his grandmother, Electress Sophia of Hanover. Following his marriage to Princess Caroline of Ansbach in 1705, the Hanoverian Prince became Duke of Cambridge and a Knight of the Garter. The future George II retained this Dukedom as Prince Wales after the ascension of his father, King George I in 1714.

The Dukedom of Cambridge was revived again in 1801 for Prince Adolphus, the tenth child and seventh son of King George III. Once again, the existence of a large royal family necessitated the use of a comparatively obscure dukedom. Prince Adolphus enjoyed a long military career, primarily in Hanover, participating in the hostilities against France in 1790s. His son, Prince George, inherited the Duchy of Cambridge in 1850 and followed a similar career to his father, fighting in the Crimean War and serving as Field Marshal Commanding in Chief for much of the second half of the nineteenth century. Since Prince George married the actress Sarah Fairbrother in contravention of the Royal Marriages Act, his son was not eligible to inherit the Duchy of Cambridge. 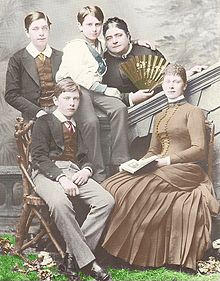 Princess Mary Adelaide of Cambridge, Duchess of Teck with her daughter, the future Queen Mary of England and her three sons.

The Cambridge name survived through the descendants of Prince Adolphus’s younger daughter, Princess Mary Adelaide of Cambridge, the Duchess of Teck. Mary Adelaide’s daughter, Princess Mary of Teck married the future King George V in 1892. When King George abolished the royal family’s German titles in 1917, Mary’s brother Alexander, adopted the surname of Cambridge, receiving the English title of Earl of Athlone. The Earl served as Governor General of Canada from 1940 to 1946.

Prince William is Queen Mary’s great-great-grandson and is therefore a direct descendant of Prince Adolphus, Duke of Cambridge. Today’s visit to Cambridge by the current Duke and Duchess reaffirms the crown’s historic relationship with Cambridge, the name of a royal dukedom since the Restoration of King Charles II.