The distinctive cover of Nathan Tidridge’s richly illustrated book, Canada’s Constitutional Monarchy alludes to a controversial image of Elizabeth II as Queen of Canada. In 1988, artist Charles Pachter created a pastel portrait of the Queen in uniform as Colonel in Chief of the Scots Guards. While Clive Uptton’s 1960s portrait of the Queen in uniform showed her at the Trooping of the Colour parade on horseback, Pachter portrayed the Queen riding sidesaddle on a moose, an animal with a habitat that encompasses nearly all of Canada. 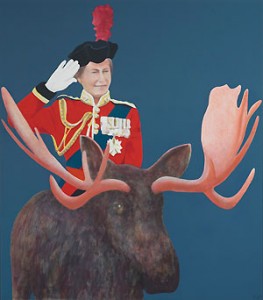 Pachter's 1988 pastel drawing of Queen Elizabeth II Trooping the Colour astride a moose.

The image was part of a series of landscapes that showed the Queen performing official duties in the presence of a moose. While the series received hostile reactions from many art critics at the time it was first exhibited, it has become an iconic collection of images exploring Canadian national identity. Prince Charles requested copies for Princes William and Harry, and Pachter created another piece in 2011 showing the Duke and Duchess of Cambridge greeting the moose for the first time. The image is an appropriate one for Tidridge’s work, which explores the numerous ways in which the crown is embedded in Canadian history, politics and society, covering a diverse range of topics from public ceremonies to the royal imprint on Canadian geography.

Tidridge is a high school teacher of Canadian history and government and a recipient of the Queen’s Golden Jubilee medal for his fifteen years of volunteer support in the education of Canadians on the role of the crown. Canada’s Constitutional Monarchy

naturally focuses on educating Canadians about the historical and political significance of the monarchy and would make an excellent textbook for any Canadian history or civics course. In contrast to the other recently published works about Canada and the Crown, The Secret Of The Crown: Canada’s Affair With Royalty and The Evolving Canadian Crown, Canada’s Constitutional Monarchy

includes numerous illustrations of the various honours conferred by the crown, key moments from royal tours, and Canadian art depicting members of the royal family. The various appendices to the main text include resources for further information, definitions of key terms, titles and offices, and a complete list of past royal representatives in British and French Canada.

Once of the great strengths of Canada’s Constitutional Monarchy

is its analysis of the diversity of connections between Canada’s provinces and the crown. Since education is a provincial responsibility, the amount of information high school students learn about the role of the crown in Canada’s history and politics varies by region, impeding a cohesive national narrative about the Canadian monarchy. The different provincial governments also have different approaches to the crown. As Tidridge explains, “In Saskatchewan, the Crown is a powerful symbol embraced by the government as a means of maintaining political autonomy within Confederation . . .In Quebec, the final stage of a bill becoming law is simply called “Assent,” the “Royal” having been removed decades ago.” This diversity of experience is essential to understanding the reasons for differing popular perceptions of the crown across Canada.

Tidridge calls for the inclusion of the crown in history and civics secondary school classes across Canada. I would have been interested to read more about his ideas for expanding popular knowledge of this key aspect of Canada’s government and history. Appendix A mentions that CBC’s first documentary in 3-D was about Queen Elizabeth II, showcasing 3D footage from the 1953 coronation and 2010 Royal tour. More documentaries, public art exhibitions and museum displays might serve as another means of generating popular interest in the Canadian crown in addition to revising the high school curriculum.

Canada’s Constitutional Monarchy is a fascinating overview of the key aspects of Canada’s relationship with the crown, incorporating the full regional diversity of the monarchy’s role. The clear glossaries and illustrations make this work an ideal resource for readers who would like to expand their knowledge of Canada’s history and government.