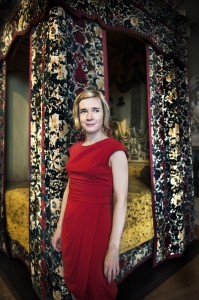 When Victoria became Queen in 1837, she shut the door of the royal bedchamber to the public. The government officials who traditionally attended royal births were relegated to the adjoining room while only the Queen’s consort, Prince Albert, and medical staff were permitted in the bedchamber for the arrival of the royal children. The Queen observed a strict separation between her public life and her domestic life. In Tales from the Royal Bedchamber,  Dr. Lucy Worsley, chief curator at Historic Royal Palaces, reveals that the monarch’s bedchamber was a ceremonial space in Tudor and Stuart times where proximity to the monarch meant proximity to political power.

Worsley presents the history of the English royal bedchamber with enthusiasm and energy. She climbs into beds to test just how comfortable they were, showing that it was impossible to lie entirely flat on a hammock-like, collapsible  medieval royal bed frame. She also tries her hand at silk weaving. Sitting on the edge of royal beds, Worsley has interesting discussions about royal marriage, mistresses and childbearing with a broad range of fellow curators, historians and authors such as Anna Whitelock, Tracy Borman and Helen Rappaport.

Perhaps the most engaging part of the documentary is Worsley’s description of the rumours that the son of James II and Mary of Modena, born in 1688, was a “warming pan baby” smuggled into the Queen’s bed to replace a stillborn child. Worsley shows viewers a warming pan, an early form of hot water bottle that was too small to hold a baby,  draws the supposed route the warming pan took through state rooms to the royal bedchamber and describes the crowd that witnessed the actual birth. The warming pan baby story was a convenient fiction to justify the Glorious Revolution&accession of William III and Mary II.

Since Worsley is chief curator at Historic Royal Palaces, much of the documentary is filmed in royal bedchambers of the Tower of London, Hampton Court and Kensington Palace. There is also a visit to the Isle of Wight to view the memorial to Queen Victoria in the private bedchamber where she died at Osborne House. If the program were longer, a trip across the channel to Versailles would have shown the origins of certain late seventeenth century English court practices. It is no coincidence that the late Stuart monarchs commissioned elaborate state beds after the Restoration of the English monarchy in 1660. Charles II was first cousin to Louis XIV  and spent part of his exile in France, observing the elaborate ceremonies that took place when the King rose from his bed in the morning or retired in the evening.

Tales from the Royal Bedchamber is a look behind the royal bed curtains of centuries past. Before Queen Victoria shut the door, the whole court thought they had the right to know exactly what took place in the royal bed. The modern fascination with the private life of the royal family is as old as monarchy itself.