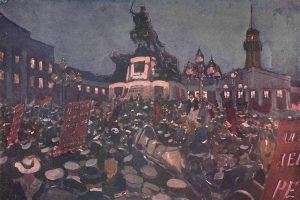 Skobelev Square during the February Revolution by Aleksandr Gerasimov, 1917

My latest article in my monthly Russian Revolution series in Smithsonian Magazine is about the February Revolution, which precipitated the downfall of the Romanov dynasty. Women played a key role in this political unrest.

“In the country’s urban centers, with men on the battlefield, women took on new roles in the workforce, as they did throughout Europe during the war. Between 1914 and 1917, 250,000 more women began working outside the home for the first time. By the outbreak of the February Revolution, close to one million female workers lived in Russia’s cities, but were paid half the wages of men and endured substandard living conditions. The journalist Ariadna Tyrkova wrote, “Day by day, the war has changed attitudes about woman. It has become increasingly clear that the unseen effort of a woman and her labour often support the entire economy of a country.””

Click here to read all my articles in the Smithsonian Magazine Russian Revolution series.

, a play written by Maxim Gorky in 1901-1902, which became especially popular following the Russian Revolutions of 1917.

The letter to King George V from Czar Nicholas II quoted in the article is reprinted in A Lifelong Passion: Nicholas and Alexandra: Their Own Story

. For more information about the relationship between King George V, Czar Nicholas II and Kaiser Wilhelm II during the First World War, see George, Nicholas and Wilhelm: Three Royal Cousins and the Road to World War I

Czar Nicholas II’s abdication manifesto, the telegrams from the Czar’s generals requesting his abdication, correspondence between Nicholas and Alexandra in February and March 1917 and documents concerning the Provisional Government’s assumption of power are available in The Fall of the Romanovs: Political Dreams and Personal Struggles in a Time of Revolution (Annals of Communism Series)

The description of women persuading the workers at the Nobel Engineering works to go on strike is reprinted in Women in Russia, 1700-2000

Excerpts from the writings of journalist Ariadna Tyrkova are available to read in Russian Women, 1698-1917: Experience and Expression, An Anthology of Sources

An excellent book about Russian women’s lives prior to the Russian Revolutions of 1917 including legal status, political influence, fashion and daily life is Women in Russian History: From the Tenth to the Twentieth Century