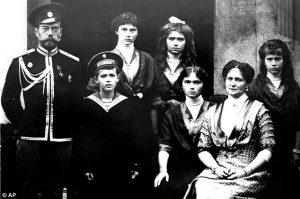 Czar Nicholas II, his wife Empress Alexandra and their five children in 1915

The 3rd article in my Russian Revolution series in Smithsonian Magazine discusses events in Russia in January 1917, 100 years ago, when revolution was imminent. The murder of Rasputin in December 1916 divided Czar Nicholas II’s extended family and there was widespread speculation of a “Rising of the Grand Dukes” that would lead to a palace coup. The concerns of the elite, however, were dwarfed by the discontent among Russia’s working class, who were facing food shortages in the cities. Despite the tensions in all social classes, Vladimir Lenin, who would eventually rise to power during the Bolshevik Revolution of November 1917, speculated that older people might not live to see the revolution.

Click here to read “On the Eve of the Russian Revolution, a Palace Coup Seemed Inevitable, But Where Would it Come From?”

From Supplication to Revolution: A Documentary Social History of Imperial Russia

is a volume of primary sources revealing changing conditions among all social estates in Russia, from the reign of Catherine the Great to the reign of Nicholas II.

Excerpts from the diaries and letters of Czar Nicholas II, his extended family and members of the diplomatic corps during the First World War are included in A Lifelong Passion: Nicholas and Alexandra: Their Own Story

The letter between Czar Nicholas II’s brother-in-law, Grand Duke Alexander and his own brother, the historian Grand Duke Nicholas is quoted in The Flight Of The Romanovs: A Family Saga

. Grand Duke Alexander survived the revolution and wrote two volumes of memoirs, Once a Grand Duke

and Always a Grand Duke

The Court of the Last Tsar: Pomp, Power and Pageantry in the Reign of Nicholas II

The conversation quoted in the article between Czar Nicholas II’s aunt, Maria Pavlovna and Duma Chairman Mikhail Rodzianko is discussed in From Splendor to Revolution: The Romanov Women, 1847–1928

. Rodzianko also wrote his memoirs: The Reign of Rasputin: An Empire’s Collapse.

by Edvard Radzinsky’s biography of Czar Alexander II focuses on his reforms and eventual assassination.

The 1917 demonstrations on the 12th anniversary of Bloody Sunday of 1905 are discussed in A Brief History of 1917: Russia’s Year of Revolution

, which examines the Russian Revolution from the perspective of ordinary people.

examines his years as an exiled revolutionary before returning to Russia and assuming power in 1917. Lenin detailed his philosophy in Essential Works of Lenin: “What Is to Be Done?” and Other Writings