Sheikha Mayassa Al Thani, daughter of Sheikh Hamad bin Khalifa Al Thani, Emir of Qatar. Sheikha Mayassa is the head of the Qatar Museums Authority, which organizes acquisitions and exhibitions for the Museum of Islamic Art in Doha, Qatar.

This week’s Economist contains an extended feature article about Sheikha Mayassa, describing her as Qatar’s Culture Queen. The 29 year old Duke University graduate is Head of the Qatar Museums Authority (QMA), an agency independent of the Culture Ministry of Qatar. The autonomy of the QMA allows Sheikha Mayassa the freedom to realize her artistic vision on a grand scale. Sheikha Mayassa explained in her first major interview, “The QMA is very much my father’s baby. He wanted to create something…to connect with the community, to create a culture dialogue within society. We report directly to him. The nice thing about my father is that he doesn’t interfere in the day-to-day business. We present the strategy, and once he agrees with the strategy and the vision we are given the authority and freedom to go ahead and execute them in the way we think fit.” The Economist notes that the QMA budget is not disclosed to the public.

The Museum of Islamic Art in Doha, Qatar

In contrast to the Emirs of the United Arab Emirates, who have created local franchises of the Louvre and Guggenheim Museums in Abu Dhabi, Sheikha Mayassa is overseeing the development of a unique regional museum. Exhibitions at the Museum of Islamic Art showcase the diversity of Middle Eastern art and culture. The museum’s opening exhibition, “Beyond Boundaries-Islamic Art Across Cultures” incorporated ceramics, metal work, manuscripts, jewellery and textiles from numerous regions including Syria, India, Spain and Uzbekistan. The Economist article discusses a recent exhibition of the ancient cultural connections between China and the Gulf states. Sheikha Mayassa and her family are also collectors of European art. The acquisition of Paul Cezanne’s “The Card Players” for $250 million set a new record in the international fine art markets.

Clos Lucé, the home King Francois I provided for Leonardo da Vinci near his principal residence, the Chateau Amboise in France`s Loire Valley.

The scale of Sheikha Mayassa’s art collection is evocative of royal cultural patronage from 1500 to 1800. In the sixteenth century, Renaissance rulers sought to emphasize the wealth and sophistication of their court through patronage of the leading artists, musicians, scientists and philosophers. King Henry VIII of England  famously sponsored the painter Hans Holbein and the writer Thomas More and composed his own music for the lute. His contemporary, King Francois I of France invited Leonardo da Vinci to relocate to the Loire Valley as a kind of artist in residence at the French court with the freedom to create works according to his interests. (da Vinci`s time in France is fictionalized in the film, Ever After: A Cinderella Story). 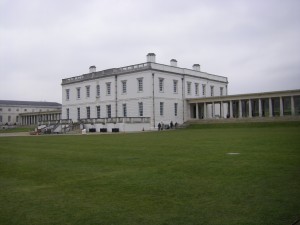 The Queen's House at Greenwich, one of the earliest examples of Palladian architecture in England.

In the mid seventeenth century, King Charles I of England and his wife Henrietta Maria were the most active patrons of art and architecture. Since continental European rulers were devoting their expenditure to fighting the Thirty Years War, numerous artists and architects traveled to England during the 1620s and 1630s. Charles I was a patron of Antony Van Dyck and Peter Paul Rubens while Henrietta Maria commissioned Orazio Gentileschi and his daughter Artemesia to paint decorative ceilings in the Queen’s House at Greenwich. In the late eighteenth century, Catherine II “the Great” of Russia was the most prolific royal art patron, buying whole collections for the Hermitage on the advice of her learned correspondents including Denis Diderot, the editor of the Encyclopedia.

In contrast to Henry VIII, Francois I, Charles I, Henrietta Maria and Catherine the Great, who all collected art for a limited court audience, Sheikha Mayassa is interested in attracting a broad local and international public to the Museum of Islamic Art. Her interest in the accessibility of her collection is similar to the goals of modern constitutional monarchs who endeavour to share the works acquired by their predecessors with the general public. Queen Elizabeth II has been described as “the curator monarch” in Robert Hardman’s recent study of her life and reign, Our Queen because she has opened the state rooms of Buckingham Palace to the public and overseen numerous traveling exhibitions of works from the British Royal Collection.

Sheikha Mayassa’s art patronage combines the grand scale of Early Modern royal art acquisition  with the interest in accessibility displayed by present day constitutional monarchs. The Museum of Islamic Art in Doha, Qatar reflects her passion for art collection and showcasing the history and culture of the Gulf States.