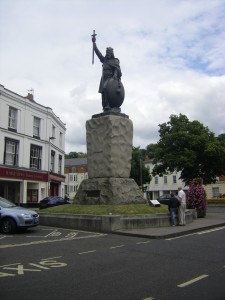 “We are not sure where King Alfred is”

This past week, Hyde900, a community group created to celebrate the 900th anniversary of the founding of Hyde Abbey received permission to examine remains from an unmarked grave at St Bartholomew’s Church in Winchester. The members of Hyde900 hope to find evidence that the remains belonged to Alfred the Great (r. 871-899), the most famous of the Saxon Kings who ruled England before the Norman Conquest.

The discovery and successful authentication of Richard III has raised hopes that other lost royal graves may be verified through carbon dating and DNA analysis. The Winchester remains will be more difficult to analyze, however, than the now famous “King the Car Park.” Alfred the Great’s remains have an uncertain history with numerous conflicting theories suggesting that they may have been destroyed in a previous century. Since Alfred reigned nearly 600 years before Richard III, at a time when female births, even among royalty, were not always recorded, finding a female line descendant to provide a blood sample for mitochondrial DNA analysis may be impossible. 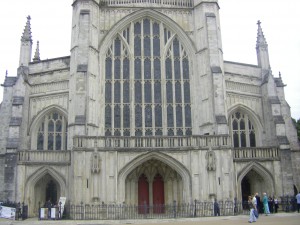 The entrance to Winchester Cathedral

I visited Winchester Cathedral in June, 2009. The current cathedral dates from 1093, decades after the Norman Conquest of 1066 that ended Saxon rule of England by Alfred the Great’s male line descendents. Although William the Conqueror’s son, William II, was on the throne at the time the new cathedral was the consecrated, the remains of the Saxon rulers buried in the Old Minster were disinterred and moved to the new cathedral. The bones of these Kings are now interred in 16th century mortuary chests in Winchester Cathedral.

There are mortuary chests with the names of Alfred’s grandfather, King Egbert of Wessex (r. 802-839), father, King Aethelwulf (r. 839-858), grandson King Eadred (r. 946-955 – shown in the picture to the left) and great-grandson, King Eadwig (955-959) but Alfred the Great and his immediate family are conspicuously missing. When I asked one of the cathedral staff where Alfred the Great’s tomb was located, I was told, “We are not sure where King Alfred is.” She explained that the remains of the famous Saxon King, his wife, Ealhswith and their son, King Edward the Elder were lost during the sixteenth century dissolution of the monasteries. 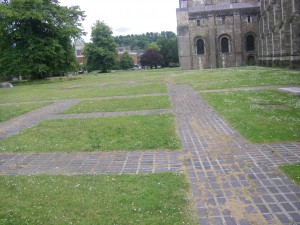 The site of the Saxon Old Minster near Winchester Cathedral, the place where numerous Saxon Kings were originally buried.

Hyde Abbey was dissolved in 1539 and St Bartholomew’s Church was built near the site but the dissolution of the Abbey is just one of the circumstances that may have contributed to the disappearance or destruction of Alfred the Great’s remains. Alfred and his family were originally buried in Winchester’s Old Minster then moved to the New Minster, a Benedictine Abbey completed in the reign of Edward the Elder. When the current Winchester Cathedral was built after the Norman Conquest, the monks from the New Minster moved to Hyde Mead with the remains and founded Hyde Abbey there. 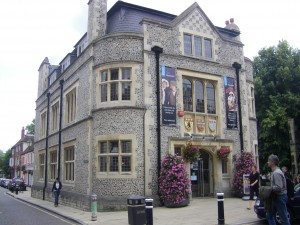 In 1788, a prison was constructed by convicts near the site of the demolished Hyde Abbey. During the building process, the graves of Alfred the Great, his wife and son may have been uncovered. According to the prison warden, Mr. Page, “the prisoners threw the bones about, broke up the coffin and sold the lead.” There were also bones, reputed to be those of Alfred, displayed in 19th century museums before being reburied. This complex and often contradictory history of Alfred’s remains does not bode well for Hyde900’s analysis of unmarked grave at St Bartholomew’s Church.

1911 illustration of Osburga reading to her son Alfred

Even if the remains are carbon dated to match the century of Alfred’s death, finding a female line descendant to authenticate the bones will be next to impossible. Mitochondrial DNA is passed through the maternal line. Sons inherit the mitochondrial DNA of their mothers but cannot pass this genetic code to the descendants. In Saxon times, the births and deaths of royal women often went unrecorded unless they married Kings, became Abbesses of convents or achieved sainthood.

Alfred had only one sister known to history, Queen Æthelswith of Mercia and she did not have any recorded children. Alfred’s mother, Osburga is named in a single Saxon source, Asser’s Life of King Alfred. Asser describes Osburga as “a most religious woman, noble in character and noble by birth” but does mention whether she had sisters or nieces. Under these circumstances, the Winchester remains will never to be verified with the certainty of Richard III’s gravesite in Leicester.

The authentication of Richard III has raised hopes that other lost royal graves will be found and verified. The bones in Winchester, however, may never be fully authenticated as the remains of Alfred the Great. While there are surviving female line descendants of Richard III’s sister, Anne of York, and the Leicester grave was untouched for nearly 500 years, the remains of Alfred the Great were moved numerous times and there are no clear descendants of his maternal relatives. The ultimate fate of Alfred’s remains may never be fully known.