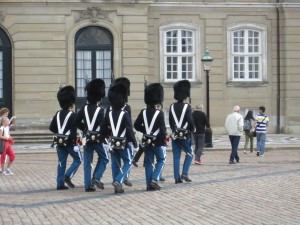 The Changing of the Guard outside the Amalienborg Palace, Copenhagen

Denmark is Europe’s oldest monarchy and the seaside capital, Copenhagen is steeped in royal history. Here are Copenhagen’s three most famous past and present royal residences:

1) Amalienborg was once home to four of Copenhagen’s noble families but after the Christiansborg Palace burned down in 1794, the royal family moved in. Today, Amalienborg is Queen Margrethe II’s official winter residence and a museum devoted to Denmark’s Kings and Queens of the House of Glucksborg from Christian IX and his consort Queen Louise, who became known as the in-laws of Europe because of the illustrious marriages of their children in the 19th century, to the present day. 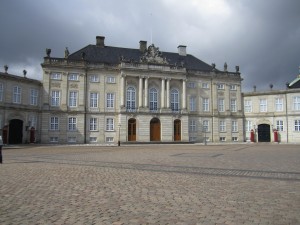 The museum reveals the daily lives of Denmark’s recent Kings and Queens, reconstructing their rooms such as Queen Louise’s drawing room and her son Frederick VIII’s study with personal objects. There are photographs from the family gatherings hosted by Christian IX and Queen Louise that brought the Russian, British, Greek, Danish and Norwegian royal families together in the late nineteenth century. Portraits, costumes and royal jewels are also on display. Photography is not permitted without a special permit but richly illustrated exhibition guides are sold in the gift shop, which also stocks royal history books that are difficult to find elsewhere. 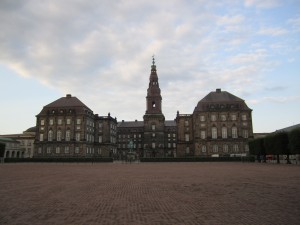 2) The current Christiansborg palace was built between 1907 and 1928 after Thorvald Jørgensen’s design won an architecture contest held to determined the future of the site. Today, Christiansborg is the seat of the Danish parliament and contains the Prime Minister’s Office and Supreme Court in addition to royal reception rooms, the palace chapel and stables. Christiansborg is the only building in the world that houses all three branches of a nation’s government. The royal reception rooms and stables are open to the public and there are guided tours of parliament. The balcony of the castle tower provides a scenic overview of Copenhagen. Since 1924, the ruins of previous palaces that once stood on this site have also been open to the public. The ruins date back to 1167, when Bishop Absalon of Roskilde built his residence on the site. Equestrian statues of Christian IX and his predecessor Frederick VII stand outside Christiansborg. 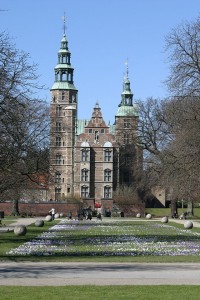 3) Rosenborg Castle was originally a royal summer residence, built in 1606 as part of Christian IV’s extensive building program for the city. Rosenborg remained a royal residence until 1710. After the reign of Frederick IV, Rosenborg only housed royalty in times of crisis such as the 1801 Battle of Copenhagen when Horatio Nelson destroyed much of the Danish and Norwegian fleets. Today, Rosenborg houses Denmark’s Crown Jewels, which date from the eighteenth century, and other regalia. The museum collections are devoted to Denmark’s monarchy between the 16th and 19th centuries. The castle has been open to the public since 1838.

Next: Following in the footsteps of Shakespeare’s Hamlet at the Kronborg in Helsingør, Denmark.