Most Western authors who write about the history, culture and politics express incredulity at how different the country’s society is from their own. In Princess: The True Story of Life Inside Saudi Arabia’s Royal Family, Jean Sasson was shocked by how women at the apex of the Saudi social period still experienced tightly regulated personal and public lives on account of their gender. In the Land Of Invisible Women: A Female Doctor’s Journey in the Saudi Kingdom, Dr. Qanta Ahmed encountered the Wahhabi sect of Sunni Islam, which is very different from the moderate Muslim upbringing she experienced in the United Kingdom. For Jayne Amelia Larson, her experience chauffeuring Saudi Princesses on a Los Angeles holiday in Driving the Saudis highlighted the extreme wealth and social inequality within the Saudi royal household.

For Pulitzer Prize winning journalist, Karen Elliot House, who has written about Saudi Arabia for the past thirty years as a diplomatic correspondent, foreign editor and publisher of the Wall Street Journal there is something eerily familiar about the desert Kingdom. House spent her childhood in Matador, Texas, an insular community of nine hundred people where religion permeated daily life and all social events took place at church. Her father had absolute authority over his family, alcohol was not permitted anywhere in the county and shorts were considered immodest dress. House uses her own formative experiences and decades of travel to Saudi Arabia to analyze the nature of Saudi society and and the obstacles prevented the kind of political change that occurred in other regions of the Middle East during the Arab Spring.

As a foreign woman navigating a gender segregated society, House describes herself as a member of a “third gender,” able to interview men and women alike across the full spectrum of Saudi society. On Saudi Arabia contains interviews from a diverse array of people from members of the royal family, to a Professor’s devout second wife, eager to convert House to Islam to the urban poor, who rely on charity from the oil wealth controlled by the Princes. These snapshots of Saudi life are fascinating and insightful, particularly her discussions with ordinary women, who often have complex attitudes toward the religion and culture that regulates their daily activities. 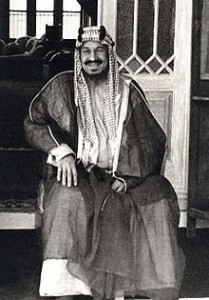 House also interviews Princes and Princesses from the House of Al Saud, the men and women who comprise one of the world’s last absolute monarchical governments. King Abdulaziz Ibn Saud, the first monarch of Saudi Arabia was the father of at least fifty sons and eighty daughters by his twenty-two wives and the succession currently passes from brother to brother amongst his elderly sons.

This unique line of succession prevented political power from being concentrated in any one branch of the vast extended royal family. House identifies the eventual transition from the elderly sons of the Abdulaziz Ibn Saud to his middle aged grandsons to be one of the most significant challenges the kingdom will face  despite the reassurance from one Prince, “The only difference is that instead of being loyal to our uncles, we will be loyal to our cousins. . .In the next two to five years this will cease to be an issue.” Although Saudi Princesses are traditionally distant from public affairs, House finds evidence that their role is changing, interviewing King Abullah’s daughter Princess Adelah about her advocacy for victims of domestic violence.

House’s interviews suggest that transition from autocracy to the accountable, constitutional monarchy favoured by many ordinary Saudis will be a long process, particularly while the royal family maintains its oil wealth. When the late Crown Prince Nayef met with reformers proposing a constitutional monarchy in 2003, he informed them angrily, “I don’t want to be Queen Elizabeth!” The younger generations of the royal family seem more receptive to political reform but House predicts that change will come slowly to the Saudi Monarchy.

On Saudi Arabia: Its People, Past, Religion, Fault Lines – and Future is an insightful and well written snapshot of one of the world’s last absolute monarchies. Karen Elliot House’s interviews with the Princes and Princesses of the House of Al Saud indicate that there are a variety of possibilities for the kingdom’s future but that change will be a gradual process.

One thought on “On Saudi Arabia: Its People, Past, Religion, Fault Lines-And Future by Karen Elliott House (Review)”