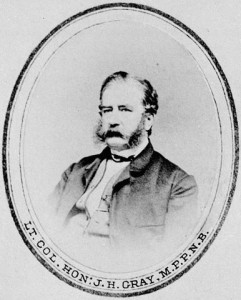 I have revised and expanded the Canadian Encyclopedia article on John Hamilton Gray, one of the Fathers of Confederation from New Brunswick. (Not be confused with another Father of Confederation with the exact same name from Prince Edward Island).

John Hamilton Gray served in the New Brunswick Legislative Assembly, in the Canadian House of Commons and on the British Columbia Supreme Court. Remembered as a Father of Confederation, he was a very early proponent of British North American union and attended the Charlottetown and Québec Conferences. Gray was one of the few 19th-century public figures to oppose the discriminatory taxation and exclusion of Chinese immigration to Canada.