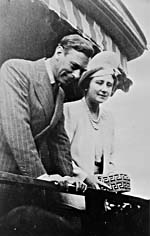 King George VI and Queen Elizabeth in British Columbia in 1939

I discussed the royal family during the Second World War with Tristin Hopper at the National Post. King George VI, Queen Elizabeth and their children, the future Queen Elizabeth II and Princess Margaret were determined to remain together in Britain but there were contingency plans in the event of a German invasion, including the purchase of Hatley Castle in British Columbia by Canadian Prime Minister William Lyon Mackenzie King as a possible wartime residence for the royal family.

Click here to read “Light everything on fire: What would have happened had the Nazis invaded Britain” in the National Post