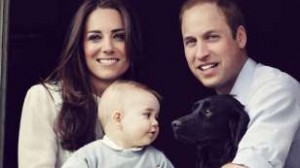 The Duke and Duchess of Cambridge, Prince George and family dog Lupo at Kensington Palace.

The Duke and Duchess of Cambridge’s finances have become the focus of public scrutiny in recent months. The extensive renovations to their apartment in Kensington Palace and erroneous reports that Prince William received a helicopter for his 32nd birthday prompted criticism of the usually popular royal couple. I discussed William, Kate and Royal Finances with Janet Davison at CBC.ca