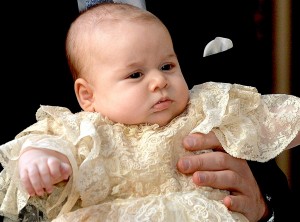 Prince George of Cambridge, son of William and Catherine, the Duke and Duchess of Cambridge and third in line to the United Kingdom and Commonwealth thrones will celebrate his first birthday on July 22.

Prince George of Cambridge has had a profound effect on public perceptions of the monarchy during his first year. The senior members of the royal family have all received media coverage based on their relationship to the infant prince. Queen Elizabeth II, who is now the great-grandmother of four, is in a similar position to Queen Victoria after the birth of the future King Edward VIII in 1894: a respected elder stateswoman with three generations of direct heirs.

Recent coverage of the Prince of Wales emphasizes his role as a doting grandfather. During his overseas tours over the past year, he has received numerous gifts for George. In Sri Lanka, in November 2013, Charles visited a tea plantation on the 1,000 acre Labookellie estate, receiving a two silver plated tea caddies, one for himself and one for his grandson. In Canada, in May 2014, Charles received a miniature leather flying jacket with a fur-lined collar from the Stevenson Air Hangar in Winnipeg.

Charles has incorporated his new role as a grandfather into his environmental activism. In a speech delivered in Charlottetown during his recent Canadian tour, Charles stated, “In other words, the health of nature’s life support systems, which are now under such threat, has a direct bearing upon the health and well-being of people…“I have long tried to draw attention to this connection but it has come into even sharper focus now that I am a grandfather.” The Duchess of Cornwall was already the grandmother of five at the time of George’s birth, including William and Catherine’s bridesmaid, Eliza Lopes, but the arrival of Charles’s first grandchild has focused public attention on her warm rapport with young children. 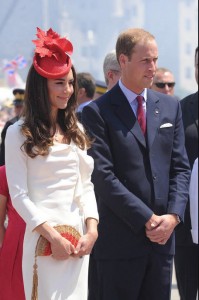 For William and Catherine, the arrival of their son has focused public scrutiny on their parenting decisions. From the time of George’s birth last year, it has been clear that the royal couple are determined to make their own decisions regarding their son’s upbringing. William drove Catherine and George home from the hospital himself. The new parents spent months in comparative seclusion after the birth, spending time with their baby at  Balmoral Castle and the Middleton family home in Berkshire.

In April 2014, George contributed to the success of William and Catherine’s tour of Australia and New Zealand. While William also traveled with his parents to the same countries as an infant, the 2014 itinerary included engagements specifically designed to showcase George. His public appearances, including visits to a Wellington play group and Sydney zoo were the most anticipated stops on the tour. In Australia, George was nicknamed “the republican slayer” because of the surge in the royal family’s popularity during the tour, just fifteen years after the Australian referendum on the future of the monarchy. 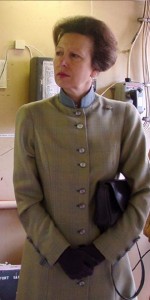 The Prince George effect is not confined to the royal baby’s parents, grandfather and great-grandparents. Other members of royal family have also received press coverage based on their relationship with George. Prince Harry’s rapport with children has received extensive attention and there is speculation that he is “desperate” to marry and start a family of his own. Although Princess Anne stated the day after George’s birth that his arrival had “Nothing to do with me, but it’s very good news,” her October 2013 visit to Canada received media attention as a tour by the royal baby’s great-aunt that took place at the same time as his christening. Reports on the christening of Maud Windsor, granddaughter of the Queen’s cousin, Prince Michael of Kent, emphasized that she would be the first to wear the replica Victorian christening gown after George.

In the past year, the arrival of Prince George has changed how the public in the United Kingdom and Commonwealth view the entire royal family. As great-grandparents, grandparents, parents, aunts, uncles or cousins of the world’s most famous baby, all the members of the royal family have become the focus of increased popular interest. As George approaches his 1st birthday, he continues to transform how the public connects to the monarchy.