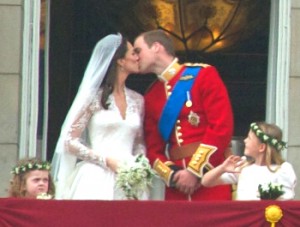 The Duke and Duchess of Cambridge on the balcony of Buckingham Palace after their wedding on April 29, 2011.

The Duke and Duchess of Cambridge are celebrating their first anniversary privately today. Buckingham Palace has not revealed where their celebrations will take place but they are expected to spend part of the day with friends then return to Anglesey, Wales, where they live while Prince William works as a Search and Rescue pilot. The understated anniversary festivities reflect the Duke and Duchess of Cambridge’s approach to their marriage, balancing their joint royal duties with plenty of private retreats as a couple.

I have discussed the royal anniversary extensively in the past week on the Sun News Network and CBC Newsworld and in interviews for Today.com, CBC.ca, CTV.ca, the Canadian Press and the Kingston Whig Standard. Common themes in these interviews include the differences between the Duchess of Cambridge’s first year as a member of the royal family and the experiences of her late mother-in-law, Diana, Princess of Wales. The Prince and Princess of Wales did not know each other well before their wedding and therefore had to build their personal relationship and public profile at the same time. Prince William was born within a year of their wedding, adding the additional responsibility of parenthood to the early years of their marriage.

In contrast, the Duke and Duchess of Cambridge dated for years before they became engaged, building their personal relationship before they began joint royal duties. Despite the intense popular interest in their potential to start a family, the Duke and Duchess have clearly decided to enjoy some time together as a couple before having children. Their decisions mirror the experiences of King George VI and Queen Elizabeth, who were married in 1923 but did not have their first child, the future Queen Elizabeth II until 1926, allowing them a few years to adjust to their joint responsibilities as Duke and Duchess of York.

The Duke and Duchess’s balanced approach to their personal and public lives bodes well for a long and happy marriage.