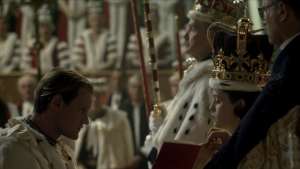 Prince Philip, Duke of Edinburgh kneeling before his wife, the Queen at her coronation in 1953 as portrayed by Claire Foy and Matt Smith in The Crown on Netflix.

In the past few weeks, I have had a couple more interviews published about the portrayal of the young Queen Elizabeth II in season 1 of “The Crown” on Netflix.

I discussed the Queen’s image with Elizabeth Renzetti at the Globe and Mail. In addition to “The Crown,” Queen Elizabeth II has been the subject of numerous works of fiction from novels such as Mrs Queen Takes the Train and The Uncommon Reader

to films such as The Queen

and Royal Night Out  and plays such as The Audience

One of the reasons why Elizabeth II appeals to novelists, screenwriters and playwrights is that her appearance and demeanor is known to the world but as an impartial constitutional monarch, she is expected to remain above politics. Fictional portrayals of the Queen are opportunities to speculate about what she is really thinking when performs public engagements or meets with her Prime Ministers.

One of the key themes in “The Crown” is conflict between the young Queen Elizabeth II’s position as sovereign and the prevailing gender roles in Britain in the 1950s. I discussed how “‘The Crown’ is a low-key guide to outfoxing the men in your way” with Rachel Thompson of Masahable.com. Although women over 30 had been able to vote in Britain since 1918 and all adult women received the franchise in 1928, there were few female members of parliament in the 1950s and a female Prime Minister would not be elected anywhere in the world until Sirimavo Bandaranaike became Head of Government in Ceylon (Sri Lanka) in 1960.

In “The Crown,” the Queen has to negotiate a role for her husband Prince Philip, Duke of Edinburgh and insist that her first Prime Minister, Winston Churchill, treat her according to her position as sovereign rather than her age and gender. She also reflects on her education, which included a thorough grounding in the constitution from the Provost of Eton College but paid little attention to subjects considered unimportant for women of her social background at the time such as mathematics or science.

Season 2 of the Crown is expected to be released in November 2017.

Click here to read “Despite attempts to decipher her, Queen Elizabeth II remains a mystery”  in the Globe and Mail.

Click here to read “‘The Crown’ is a low-key guide to outfoxing the men in your way” at Mashable.com