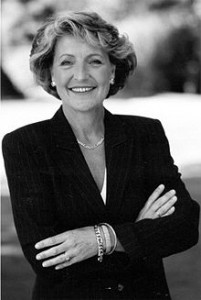 Princess Margriet of the Netherlands

The royalty attending the 2012 Paralympic Games, which will be declared open today by Queen Elizabeth II, include numerous members of International Paralympic Committee Honourary Board. Attendees include Princess Margriet of the Netherlands, Princess Astrid of Belgium and Prince Albert of Monaco, who are all members of this committee, which “strive[s] to maintain the issue of sport for persons with a disability high on the agenda of the global community (Ian Brittain,The Paralympic Games Explained, p. 88-89.)” The IPC Honourary Board, which also includes Crown Princess Victoria of Sweden, Grand Duchess Maria Teresa of Luxembourg, and Princess Haya Bint Al Hussein of Jordan also assists with awareness and funding initiatives for the Paralympic Games worldwide.

The IPC Honourary Board has a Canadian connection through Princess Margriet of the Netherlands, who spent her early childhood in Ottawa during the Second World War and continues to be a frequent visitor to Canada. The Dutch royal family fled the German invasion of the Netherlands in 1940. Margriet’s grandmother, Queen Wilhelmina resided resided in the United Kingdom as Head of the Dutch government in exile while her father Prince Bernhard served in the Royal Air Force then became Commander of the Dutch Forces during the Allied Invasion. For her own safety and that of her daughters, Margriet’s mother, Princess Juliana fled to Canada, where she resided as a guest of the Governor General and his wife, King George VI’s Uncle and Aunt, the Earl and Countess of Athlone. 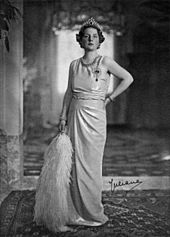 The upcoming birth of Princess Juliana’s third child in Ottawa was announced in 1942. While in hiding from the Nazis in Amsterdam, Anne Frank recorded in her diary on September 21, “I sometimes listen to the Dutch broadcasts from London. Prince Bernhard recently announced that Princess Juliana is expecting a baby in January, which I think is wonderful. No one here understands why I take such an interest in the royal family (Anne Frank, The Diary of a Young Girl: The Definitive Edition, p. 38).”

In Ottawa, the Earl of Athlone gave royal assent to a special law declaring the maternity ward of the Ottawa Civic Hospital to be temporarily extraterritorial, so that the baby would have Dutch citizenship alone. Princess Margriet was born on January 19, 1943 and was named for the daisies worn by members of the Dutch resistance (See Albert VanderMey, When Canada Was Home: The Story of Dutch Princess Margriet). The Ottawa Peace Tower flew the Dutch flag in celebration of the new princess’s arrival. Prime Minister William Lyon MacKenzie King attended the christening in St. Andrews Presbyterian Church. 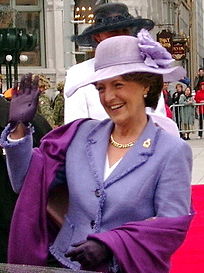 While in Canada, Princess Juliana and her three young daughters resided at Stornoway, now the residence of the leader of Her Majesty’s Loyal Opposition, the second largest party in the Canadian House of Commons. They were part of a community of exiled royalty in Canada during the Second World War. The Earl and Countess of Athlone’s guests in and nearby the Governor General’s residence, Rideau Hall, included Crown Princess Olav and Crown Princess Martha of Norway, Grand Duchess Charlotte of Luxembourg, King Peter of Yugoslavia, King George of Greece and the former Empress Zita of Austria and her daughters.

Princess Margriet returned to Europe with her family at the end of the Second World War, in 1945. In gratitude for Canada’s role in liberating the Netherlands and providing a refuge for the Dutch royal family, Princess Juliana sent 100,000 tulip bulbs to Ottawa, the first of many gifts of this kind. As Canada’s capital became famous for its flowers, the Ottawa Tulip Festival began in the 1950s. Princess Margriet has made numerous official visits to Canada as an adult, and celebrated the 50th anniversary of the Tulip Festival with Canadians in Ottawa in 2002. In 1967, she married Pieter van Vollenhoven and they have four sons and ten grandchildren.

In the Netherlands, Princess Margriet’s charitable patronage focuses on organizations that assist people with disabilities and long term illnesses. As a trained nurse, Margriet joined the local branch of the Netherlands Red Cross as a volunteer in 1966. She was elected vice-president of the National Netherlands Red Cross Society in 1987 and has held that position ever since. Margriet is a member of the Advisory Committee for Summer Camps for Young Cancer Patients and the National Association for the Care of the Terminally Ill as well as Patroness of the Equestrian Foundation for the Disabled among numerous other charitable organizations. Her work with the International Paralympic Committee is part of a lifelong commitment to improving the circumstances of people living with illnesses and disabilities.

Princess Margriet of the Netherlands and her husband, Pieter van Vollenhoven will be attending Paralympic Events in the United Kingdom from August 29 to September 2. For Dutch and Canadian athletes alike, Margriet’s involvement in the Games represents the international success of the Paralympic Games, and the continuing close relationship between Canada and the Netherlands.