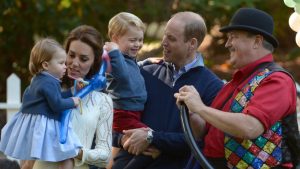 Princess Charlotte, the Duchess of Cambridge, Prince George and the Duke of Cambridge in Victoria, British Columbia (Photo Credit: The Canadian Press)

The royal tour of British Columbia and the Yukon by the Duke and Duchess of Cambridge and their children, Prince George and Princess Charlotte ended today with a series of engagements devoted to young people and mental health advocacy and a departure from Victoria harbour where both royal children waved to the crowds.

My interview with CTV News Channel today discussed the first royal tour of British Columbia: the visit by Princess Louise and her husband, Governor General Lord Lorne in 1882. I also talked about yesterday’s children’s party at Government House, which George and Charlotte attended along with their parents, William and Kate.

Click here to watch my interview with CTV News Channel.