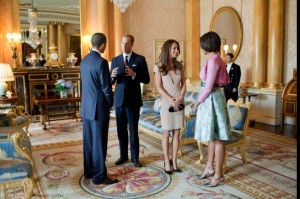 The Duke and Duchess of Cambridge meet with President Barack Obama of the United States and his wife Michelle. Since becoming a member of the royal family, Catherine has assumed an increasingly public profile.

On Monday March 19, Catherine, Duchess of Cambridge delivered her first public speech, launching  the new East Anglia Children’s Hospices in Ipswitch. There was intense interest in her speech on behalf of this charity because Catherine has spoken so little in public during her marriage to Prince William. During the Duke and Duchess of Cambridge’s tour of Canada in 2011, Catherine had numerous private conversations with ordinary Canadians but William gave all the official speeches. This approach allowed the Duchess to adjust to her new public role.

In her speech in Ipswitch, Catherine had the opportunity to draw popular attention to a charity that she feels strongly about, stating “What you do is inspirational, it is a shining example of the support and the care that is delivered, not just here, but in the children’s hospice movement at large, up and down the country.” Catherine’s decision to become the patron of charity that provides end of life care for seriously ill children follows a long tradition of royal involvement in raising awareness of medical trends that improve the comfort and care of patients.

As Frank Prochaska discusses in Royal Bounty: The Making of a Welfare Monarchy the relationship between the British monarchy and the patronage of charities that improve the lives of ordinary people dates from the reign of King George III, in the eighteenth century. Queen Victoria’s daughters were particularly interested in reforming medical care to improve patient quality of life. Her third daughter Helena, who became Princess Christian of Schleswig-Holstein was one of the original members of the Red Cross when it was founded in the Franco-Prussian War of 1870. She helped initiate the state registration of nurses and started the military nursing service during the Boer War.

According to the Memoirs of Helena’s daughter, Princess Marie Louise, entitled My Memories of Six Reigns, “We were taught as children to work for the sick and distressed, and I can still remember, at the age of six, trying to roll a bandage which was destined to be sent out to the sick and wounded in the Russo-Turkish War of 1878.” The importance of being personally involved in patient care was passed from one generation of royal women to another. Helena’s elder sister, Alice, who became Princess Louis of Hesse-Darmstadt actively supported the improvement of care for expectant mothers in Hesse-Darmstadt. Both Alice and Helena were supporters of Florence Nightingale’s hospital reforms and spread awareness of the principles of Nightingale’s Notes on Nursing: What It Is, and What It Is Not.

Queen Victoria’s granddaughters spread the British conception of service monarchy  through their marriages to Princes, Kings and Emperors throughout Europe. Alice’s daughters all shared her strong commitment to public service. For example,  when Elizabeth and Alexandra married into the Russian Imperial family, they encouraged Russian noblewomen to move beyond making donations to hospitals to actually involving themselves in the care of the wounded. Empress Alexandra and her daughters trained as nurses during the First World War while Grand Duchess Elizabeth founded the Martha and Mary order of working nuns during her widowhood.

Through her patronage of the East Anglia Children’s Hospices, the current Duchess of Cambridge is following a long tradition of royal involvement in patient care. Queen Victoria’s daughters and granddaughters did not simply donate to hospitals but championed medical reform, actively involving themselves in improving the welfare of the sick and wounded. This conception of service monarchy clearly has a bright future in the twenty first century.

One thought on “Catherine, Duchess of Cambridge Makes Her First Public Speech at the East Anglia Children’s Hospice in Ipswitch”