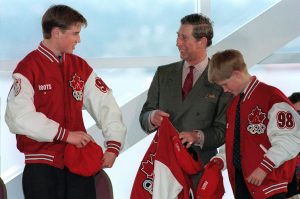 Prince William and his father Prince Charles and brother Prince Harry try on jackets and hats from the Canadian Olympic Team Uniform after being presented with them at a environmental heritage event in Vancouver during their 1998 tour. (Photo Credit: Canadian Press)

In a recent interview with The Canadian Press, I discussed Prince William’s 1998 visit to British Columbia with his father, Prince Charles and younger brother, Prince Harry. The tour attracted both teenage fans of the young princes and older people who had mourned the passing of Diana, Princess of Wales, the previous year and wanted to see her sons.