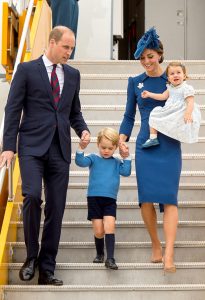 The Duke and Duchess of Cambridge and their children, Prince George and Princess Charlotte arrive in Canada

A partial breakdown of the cost of the Duke and Duchess of Cambridge’s 2016 Canadian tour was released today. I discussed the expenses of the royal tour with the Canadian Press, noting the differences between William and Kate’s 2011 and 2016 tours of Canada and the positive impact of their presence for Canadian charities, institutions and environmental initiatives.