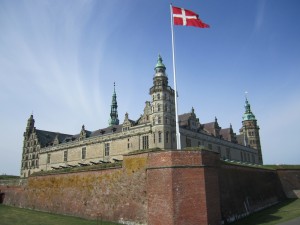 “But what is your affair in Elsinore?
We’ll teach you to drink deep ere you depart.” – Hamlet

around 1600, Kronborg Castle in Helsingør (Elsinore), Denmark was the most famous royal residence in Northern Europe. King Frederick II rebuilt Erik of Pomerania’s grim medieval castle of Krogen as a stately Renaissance Palace with an enormous ballroom for lavish court entertainments. When the King proposed a toast, the cannons fired and the trumpets sounded.

The ballroom at Kronborg

Frederick’s daughter Anna honeymooned at the Castle with her new husband, King James VI of Scotland (the future James I of England) in 1589-1590. The royal couple had already been married by proxy at Kronborg and married in person at the Old Bishop’s Palace in Oslo but they decided to have a third wedding in the Kronborg  ballroom followed by more celebrations. They stayed in what is now known as “the Scottish suite” before traveling to Copenhagen for the wedding of Anna’s sister Elizabeth to the Duke of Brunswick then sailing to Leith, Scotland. Anna’s brother, King Christian IV, continued the building program at Kronborg, making additions to the chapel including a closed royal box so that he could nap unobserved during church services.

The Kronborg Cannons, overlooking “the Sound” between Denmark and Sweden

How did Frederick VI and Christian IV finance their building program and royal festivities? From 1423 to 1857, the monarchs of Denmark charged “sound dues” to any vessel passing through the sound between Denmark and Sweden to enter or leave the Baltic Sea. These tolls were the chief revenue source for generations of Danish Kings, allowing them to maintain the most sumptuous court in Northern Europe.

In 1423, Erik of Pomerania (King Erik VII of Denmark) summoned merchants from the German Hanseatic League and informed them that every ship sailing past Helsingør would henceforth have to lower its flag, strike its topsails and drop anchor so that the captain could go ashore to pay a gold coin to pass in or out of the Baltic. Erik’s control over Scandinavia gave him the power to impose these lucrative shipping controls. His great-aunt and predecessor, Margrethe I, united Sweden, Norway and Denmark in the Kalmar Union, which lasted until 1523. Erik built the original castle on the site of Kronborg to ensure that no passing ship attempted to evade the sound dues. If a ship attempted to pass Helsingør without paying, the castle cannons would fire a shot across the bow, and the cost of the ammunition would be added to the captain’s dues when he finally came ashore,

Statue of Erik of Pomerania in Helsingør

Attitudes toward the sound dues varied among Europe’s merchants and sea captains. A 1585-1586 German atlas praised the Kings of Denmark for keeping pirates out of the Baltic stating, “Denmark, which owns no gold mines, does however possess something no less valuable in the Sound, whose waters flow with gold, for all ships must pay toll in gold to the King, who in return, by preventing the ungodly assaults of pirates, reserves the use of the sea for the benefit of merchants. (Quoted in David Hohnen, Hamlet’s Castle & Shakespeare’s Elsinore

, p. 10) ” The heads of captured and executed pirates were displayed on the Kronborg battlements.

Other observers quietly grumbled that the King of Denmark was little better than a pirate himself for insisting that passing ships pay a percentage of the value of their cargo in sound dues. Since the King also had the first right to purchase any goods passing through the Sound, Captains were motivated to state a high value for their cargo to prevent the King from purchasing their goods at a loss. One historian described the system as “400 years of legal piracy. (Hohnen, p. 11).”

The era of sound dues finally came to an end in 1857 when an American merchant vessel refused to the pay the toll. The American government declared that Sound Dues dated from “a remote and barbarous age, even before the discovery of America” and that “they apply exclusively to the nations of Europe (Quoted in Hohnen, p. 109).” The United States’s refusal to pay the Sound Dues, however, encouraged European nations to do the same. Denmark received a final payment from all maritime nations that traded in the Baltic Sea but the monarchy permanently lost its most lucrative source of income. The era of lavish entertainments at the Danish court had come to an end.

Next: Leith, Scotland: The Last Harbour of the Royal Yacht Britannia